Fighting Street Gun Violence as if It Were a Contagion

Yes, violence. A disease is a condition with identifiable symptoms that causes sickness or death. That describes violence.

And we know it spreads itself. There is overwhelming evidence that hurt people hurt other people. Children who grow up in poverty and misery do not commit violence — unless they experienced it. If they were chronically exposed to violence as a child, they are more than 31 times more likely than other people to behave violently themselves.

Dr. Slutkin’s work taught him that to control an epidemic, people must abandon practices that spread disease. Changing community norms is a far more effective method than simply giving people information. “The best predictor of condom use is whether people think their friends use condoms,” he said.

That’s why trusted community members with some training are so effective. “Outsiders can guide and train and provide people with skills,” said Dr. Slutkin. “But all epidemics are always worked from the inside out.”

In 1995, he began work on an idea that is now at the core of a program called Cure Violence, which is part of the University of Illinois at Chicago School of Public Health. (The program used to be called CeaseFire, and still is in many places. That’s confusing, as Ceasefire is also the name of a completely different violence-prevention program.)

Cure Violence didn’t invent the idea of street work to reduce crime; Chicago was using it in the 1940s, according to Andrew Papachristos, a prominent scholar of gun violence who now teaches at Northwestern. “But Cure Violence took it to another level,” Professor Papachristos said. “It professionalized street work and put it into public health.”

Demeatreas Whatley is 46 and a part-time college student who ultimately wants to get a doctorate in public health. He also works for Cure Violence at one of its 10 Chicago sites — a new storefront office in the Grand Crossing neighborhood on Chicago’s South Side, one of the city’s most violent places.

When Mr. Whatley got out of prison in 2008, after serving 17 years for aggravated discharge of a firearm, one of the first things he did was to volunteer for Cure Violence. “I wanted my block safe,” he said.

The use of a gun to settle even petty disputes is not at all the norm in poor communities of color. It is the norm among a very small group of individuals — mostly young, mostly men. For this group, people like Mr. Whatley are the most credible messengers. For nine years he worked as a “violence interrupter,” which meant detecting imminent violence, talking people out of shooting and mediating the kind of disputes that often lead to chains of retaliatory shootings.

I asked Mr. Whatley to describe an intervention.

“Say there’s a fight,” he said. “The guy who loses goes to get a gun. You’ve got to calm him down and let him save face. I tell him: ‘I lost plenty of fights. At the end of the day, you’re a stand-up guy because you fought. It’s the coward who goes to get the gun.’”

Mr. Whatley said people forget about consequences in a heated moment, especially if friends are egging them on. So he reminds them. “If you shoot this guy, you’ll be the prime suspect,” he would say. “Do you want to lose at least eight years of your life because you lost a fight? Why don’t you leave it to us?” And he and his colleagues would then find someone trusted by the other party, who could persuade the man to drop the beef and stay away.

A few months ago, Mr. Whatley began supervising Cure Violence’s new site in Grand Crossing. His group has 11 violence interrupters and four outreach workers. The outreach workers’ job is to get the clients help, from finding a slot in drug or alcohol rehab to helping a client pack up and move in the middle of the night. All 15 staff members are from the neighborhood. 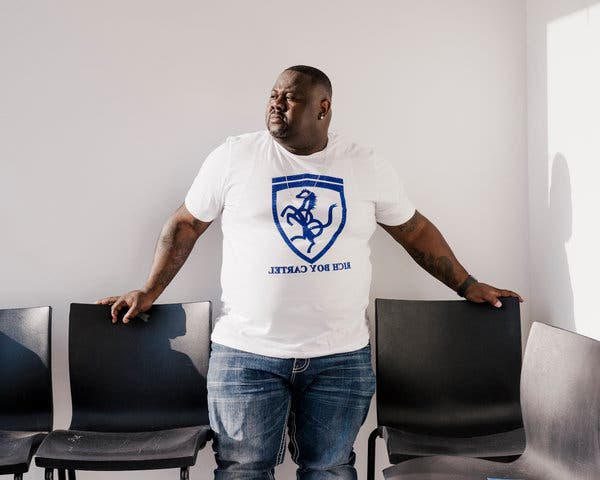 Many said they had been doing this work informally before they were hired. “There’s a sense of urgency to right your wrongs,” said Jessie Davis, a violence interrupter.

Shooting is a relatively easy behavior to change, Dr. Slutkin said. People addicted to smoking want to smoke. Risk-takers want to have risky sex. But generally speaking, tough street guys brandishing guns don’t want to shoot. John Hardy, a former violence interrupter who is now a senior program manager, said that such people often seek out an interrupter so they can back away from a public threat without losing face. “Consciously or unconsciously, they want someone to talk them down,” he said.

Every Tuesday afternoon, the Grand Crossing staff meets to review the past week.

In late April, Mr. Whatley sat at the front of the room with his laptop, on which he tracks the group’s work. The staff members, all wearing black Cure Violence hoodies or orange windbreakers, went over the week’s incidents of violence, discussed particularly hot corners or blocks and described mediations they had conducted.

One interrupter said that a fight had erupted over a video posted on social media, a huge generator of beefs. The interrupter persuaded the post’s originator to agree to take down the video, and got the person who felt disrespected to leave it at that.

“Good work,” Mr. Whatley told the group. “We’re going to close out April pretty strong.” The staff had conducted 18 mediations — double the number in March. In the past month there was not a single gang-related homicide in the Cure Violence site’s territory, he announced.

Shootings are an after-school and nighttime activity, so that’s when the staff members go out on the beat. They go in groups of five to seven people for safety. After the meeting, one group drove a few blocks and parked in the lot of a Foodtown grocery store. They stood on the sidewalk, up against a chain-link fence.

The location was strategic, just down the block from two schools about to let children out for the day. The staff gave out postcards with messages seeking an end to violence.

Four young men who are clients of the program wandered over, and the staff invited them to a monthly cookout the group was holding on the weekend. They traded stories about their children. An outreach worker told them about a job-training program at Chicago’s power company.

A middle-aged man pulled into the parking lot and got out of his car. When he was young, he had been involved in violence. Now the man is a key source of intelligence for Cure Violence, said an outreach worker named Chrisse. “He helps us stay on top of things,” Chrisse said. “He gives me a heads-up if it’s clear or there are guys lying in wait. I’ll get a text: ‘Not a good day, Chrisse.’”

Cure Violence is working in a dozen cities in Latin America, and several in Africa and the Middle East. Iraqis are using the model to defuse sectarian conflicts, and Moroccans to try to reduce violent extremism.

When the program began in San Pedro Sula, Honduras, the city was the most violent on earth, with a murder rate 31 times the global average. That’s no longer the case. In the first five Cure Violence zones, which had 89 shootings from January to May in 2014, there were only five in the same period of 2015, and several zones went more than a year without a single shooting.

In the United States, many Cure Violence neighborhoods have similarly gone on long streaks without a shooting — some a year or two. Other places don’t manage a streak but do have remarkable drops in violence nevertheless. (There are also some mixed results: In Baltimore a decade ago, the program reduced violence over all, but in one neighborhood murders rose, because of an intense gang war.)

Cure Violence operates in 21 United States cities, but it will always be most linked to its hometown, Chicago, which, sadly, in recent years has been America’s murder capital. The city’s homicide rate has swung wildly: In 2003, homicides dropped by 25 percent. Between 2014 and 2016, they rose by 87 percent. And last year, they abruptly dropped again.

Chicago’s spike a couple years ago can be attributed to several factors: a breakdown of police-community relations after the shooting of Laquan McDonald by a policeman in 2014, increased access to already highly accessible guns, and Illinois’s multiyear inability to pass a budget, which has resulted in deep cuts to social programs such as summer jobs, after-school programs and drug treatment.

Those cuts have also affected Cure Violence: At times it’s been in 15 Chicago neighborhoods, and at times virtually shut down. Chicago’s conservative police department hasn’t protected the program. The department has never been truly comfortable with the public health idea, or with ceding influence to former criminals. (The program is good for interrupters — “it keeps us from relapsing,” said Mr. Whatley. But some do fall back into violence; about a dozen in the city have been charged with serious crimes in the past decade.)

But there’s something curious about the ups and downs of Chicago’s homicide rate: Every turning point in the graph coincides with a change in Cure Violence’s scope. When it expanded, murder started to fall. When the program was cut, killings started to jump.

None of that is scientific evidence, Professor Papachristos, the sociologist, pointed out in an interview. Seven years ago, he wrote a paper arguing (pdf, Page 1053) that the program’s rapid spread had come despite a lack of rigorous evidence of success.

But he’s changed his mind, he said, citing several recent high-quality studies of Cure Violence, including research on New York City programs. They found that shootings declined much more in Cure Violence neighborhoods than in comparable areas without the program, as did social support for the use of guns to solve disputes.

“The evaluations are positive but at times still mixed,” said Professor Papachristos. “But to think it’s going to work with every gang and every neighborhood is Polyanna-ish. What needs to be done is: ‘What’s the combination that makes it work? What are the contexts in which it doesn’t work?’”

Some of the answers are obvious. Like any program, it doesn’t work when it exists only as a skeleton. And efforts to copy Cure Violence have failed when organizers leave out key parts, such as the focus on the very highest-risk individuals.

Violence interruption is the heart of the public health model. But it’s not the only part. Next week, I’ll look at a new way street workers are trying to keep people alive.

Ms. Rosenberg is a co-founder of the Solutions Journalism Network, which supports rigorous reporting about responses to social problems.